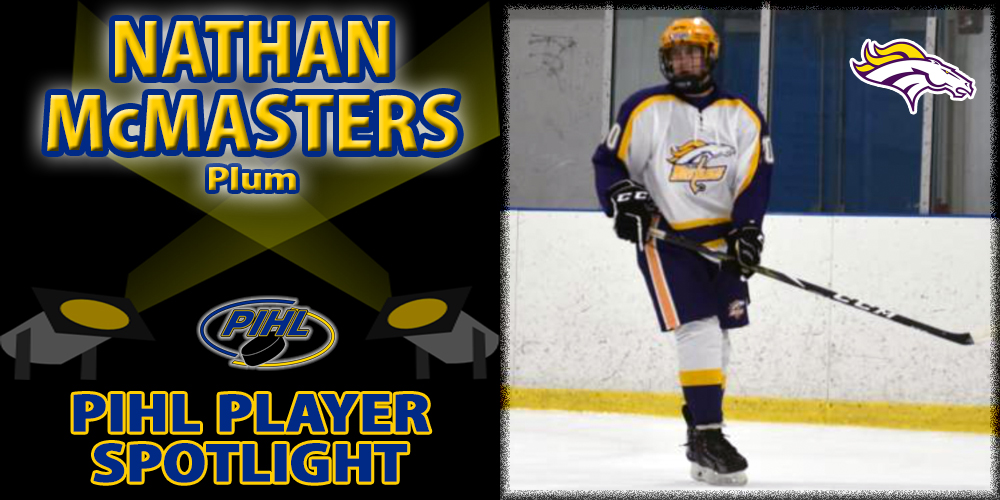 Q: What got you started in hockey and how old were you?
A:  Actually, this is the first year of hockey I have ever played, even though I am currently 16 years old. The reason why I started playing hockey is because of my twin brother Nick McMasters, who has been playing for a very long time. It was so much fun watching him play and compete that i just has to give it a try.  It worked out, and hockey has been treating me well.

Q: What do you enjoy most about playing high school hockey in the PIHL?
A: One of the things that I enjoy most about playing hockey in the PIHL is the level of intensity and the level of competition that it brings. There is never a game where I think that we are going to get blown out or we are going to crush the other team. If you play your best hockey, you can compete.

Q: What is the most-memorable hockey game you have ever been involved in with your PIHL team?
A: Considering that I have only been playing hockey for a few months now, my most memorable game was our first regular season game against Shaler. This game wasn’t only memorable because it was my first win on a hockey team, but because I scored my first goal ever in my first game ever! Every single one of my teammates were extraordinarily happy and proud of me, but they were definitely surprised more than anything. There are many more games to come for me, though, and there are plenty more memorable moments that are going to occur.

Q: Are there any routines or rituals you must stick to before every game, such as listening to a certain song?
A: Two things that I do before every game are drink a Monster Hydro and catch football with my hockey team outside of the rink. I like to believe that the energy drink gets me more energized, but I'm not sure that it really does. I just drink it because every time I do, I feel like I play better. Football also helps because it gets me and the whole team fired up and ready to go.

Q: If you were put in charge of the entire sport of hockey and could change just one thing about the game, what would it be?
A: If I was in charge of hockey, one thing that I would change would be the penalty system. I would make it so that every penalty committed results in a penalty shot instead of a power play. This would definitely make the game more interesting and fun, but more players would refrain from taking penalties.

Q: What is something unique about you that most people would be surprised to know?
A: One thing that is unique about me that most people don’t know is that I have a tattoo. The tattoo is on the left side of my chest and it says “Thomas Jack,” which is the name of my best friend who recently passed away. I play every game for him.

Q: What are your two favorite apps on your smartphone, and why?
A: My two favorite apps on my phone would have to be the ESPN Fantasy Sports app and Snapchat. I would say the fantasy app because it’s fun being able to brag to your friends about how you won that week of fantasy football or hockey, and you can also keep up on players' stats. Snapchat would probably be because I can communicate with my friends, my team, and my family, plus I can see what everybody is up to.

Q: Would you rather be Superman or Batman, and why?
A: I would definitely rather be Superman than Batman. Batman doesn’t even have any superpowers -- the only thing he has is a sidekick and a cool car. Superman can fly, and he’s the strongest person ever. Who wouldn’t want to fly?