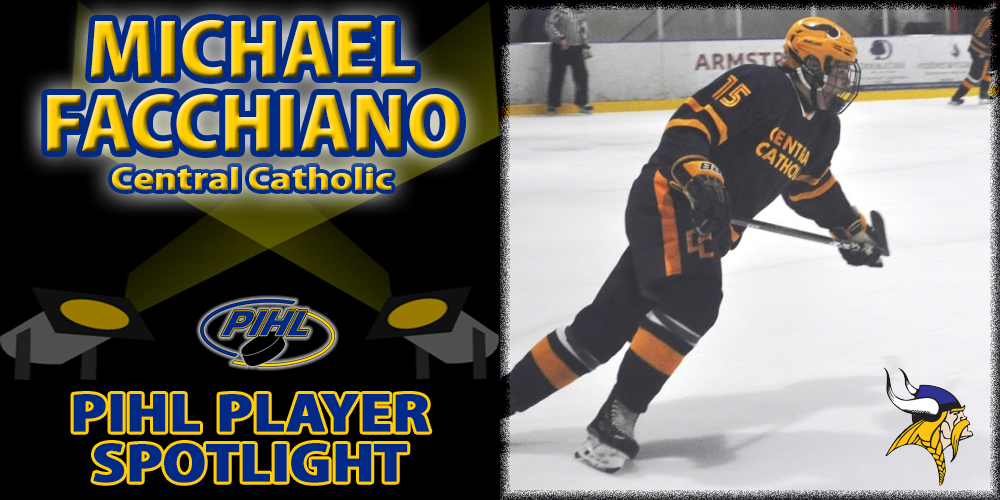 Q: What got you started in hockey and how old were you?
A:  As far back as I can remember, I loved hockey. My older cousins really showed me the sport, and I loved watching hockey and going to the games. I started skating when I was 4 and started playing when I was 5.

Q: What is the single best thing about playing for your PIHL team?
A: My teammates have become my brothers. I came to Central Catholic knowing only one person on my team, and ever since freshman tryouts, we have all been great friends. Hockey is a great way to make friends, just like any other sport.

Q: What do you enjoy most about playing high school hockey in the PIHL?
A: I enjoy playing against all my buddies that go to other schools. It’s great to see your buddy from years ago and compete against him on the ice.

Q: What is the most-memorable hockey game you have ever been involved in with your PIHL team?
A: That would be our win against Peters Township in the semifinals of the JV Tournament. We won in overtime, and it was the best feeling ever!

Q: Which opposing PIHL team do you really enjoy playing against, and why?
A: It's definitely Peters Township. I live in Peters Township, but I go to Central Catholic. So it is great to be able to compete and against all my old buddies and people who are still my friends from my neighborhood.

Q: Are there any routines or rituals you must stick to before every game, such as listening to a certain song?
A: Of course I do. There are too many songs that we listen to before games, so I can not name them all. But we do listen to a lot of rap such as CAPO by NLE Choppa. It’s provocative, but it gets the boys going. It really puts us in the mood to go win a game.

Q: If you were put in charge of the entire sport of hockey and could change just one thing about the game, what would it be?
A: No neckguards. They are annoying, and I do not see how they serve a purpose in playing. I think that neck guards should be optional because the chance you get hit in the neck with a skate blade is very slim to none.

Q: Are you involved in any other organized sports or activities outside of high school hockey?
A: No. Hockey is the only thing I really partake in outside of school activities.

Q: What is something unique about you that most people would be surprised to know?
A: I am adopted from Russia, so it makes sense that I play hockey.

Q: What are your two favorite apps on your smartphone, and why?
A: Snapchat and Instagram. I use Snapchat instead of my phone number because really only my family has my number and I prefer it that way. Instagram is so advanced now, it is crazy. You can see people’s pictures of cars, sports, lifestyles, and more.

Q: Would you rather be Superman or Batman, and why?
A: I would be Batman because I would have a sweet cave and a waterfall with so much money that I couldn’t spend it all.

Q: What person outside of your family has done the most for you?
A: Probably my friend Dayne Martin. I barely knew him coming to Central, and now we can tell anything to each other. We really get each other, and I do think that goes along with our chemistry on the ice. I know where he is going to be, and he knows where I am going to be.

Q: What plans do you have for after you graduate from high school?
A: I plan to go to college and play club hockey. I want to get finish my education, but I also do want to continue to play hockey.