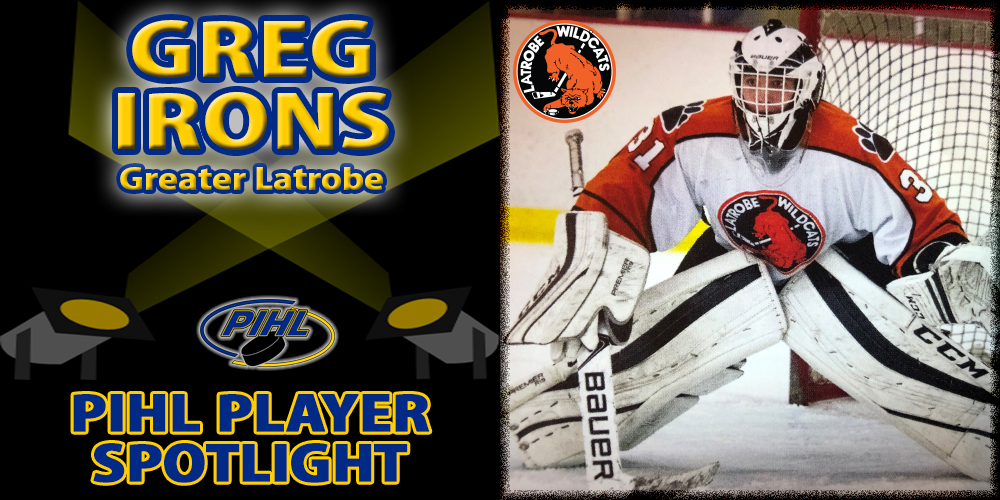 Q: What got you started in hockey and how old were you?
A: A good friend of mine, Darick Hrtyanski, got me started in dek hockey when I was six years old. I really enjoyed it, so when I was eight, my dad offered to sign me up to start playing ice hockey.

Q: What is the single best thing about playing for your PIHL team?
A: Latrobe has a strong fan base and a big appreciation for hockey. Home or away, we always get a large amount of fans and student section, and I always feel like I'm playing for more than just the team.

Q: What do you enjoy most about playing high school hockey in the PIHL?
A: I love how I get to play hockey with all of my school friends. We can connect in school and hype up the games together, and then the next day we can talk about how we played and what went on during the game. Being on a team with that group of people gives you a special type of bond that will last a lifetime.

Q: What is the most-memorable hockey game you have ever been involved in with your PIHL team?
A: It was definitely my last year of middle school hockey. We had an amazing regular season and a great playoff run, and we ended up beating Upper St. Clair in the Tier 1 finals in overtime. The feeling of winning that championship was indescribable.

Q: Which opposing PIHL team do you really enjoy playing against, and why?
A: Hempfield. We're rivals, and it's always a good game that gets the fans really hyped up. The atmosphere is different than most games because it's the home rink for both teams.

Q: Are there any routines or rituals you must stick to before every game, such as listening to a certain song?
A: I have the same stretching routine to get my legs warmed up, I throw a lacrosse ball against the wall, and finish the last of Nick Byrd's G Fuel.  The boys have to listen to "Dreams and Nightmares" as the last song before we go out on the ice.

Q: If you were put in charge of the entire sport of hockey and could change just one thing about the game, what would it be?
A: I would use Olympic-sized rinks. The extra space gives more room and allows for the skilled players to show what they can do.

Q: Are you involved in any other organized sports or activities outside of high school hockey?
A: I work at Chick-Fil-A, and I'm involved in many school clubs: Link Crew, Key Club, National Honor Society, and Chess Club.  I'm also involved with the Fellowship of Christian Athletes and volunteer with my church group.  Plus, I play amateur hockey for the Allegheny Badgers.

Q: What is something unique about you that most people would be surprised to know?
A: My GPA. Most people would not know that it's above a 4.0 because I spend a lot of time clowning around.

Q: What are your two favorite apps on your smartphone, and why?
A: The first one is Snapchat because it's a way I like to communicate with my friends. I get to see them and what they're up to together instead of common text messages. The second is Spotify. It's my music app, and I use it wherever I go.  It's crucial before hockey games to get me pumped up.

Q: Would you rather be Superman or Batman, and why?
A: Batman. He can be a superhero without the superpowers that Superman needs to be super.

Q: What person outside of your family has done the most for you?
A: Leslie Rossi. She's the one who got me into playing goalie, and she lent me my first set of goalie equipment. I wouldn't be a goalie if it weren't for her. She is instrumental in making Latrobe hockey great from Developmental to Varsity.

Q: What plans do you have for after you graduate from high school?
A: I plan to attend Penn State University and study Biological Engineering.