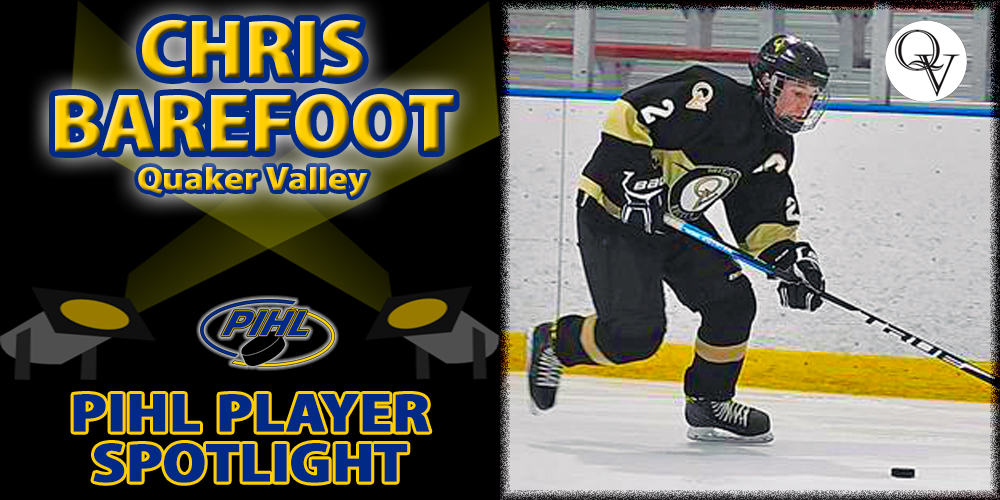 Q: What got you started in hockey and how old were you?
A: I was in 3rd grade and some of my friends were playing hockey, so I thought I'd give a try, considering my baseball career was not going to work out at the time. So I learned how to skate, and I participated in the developmental program at my school until I finally was able to join the team in 7th grade.

Q: What is the single best thing about playing for your PIHL team?
A: Getting to work with some amazing people, such as my coaches, who have always pushed me to be my best in every way, on and off the ice. Working with them and my teammates has been a big part of my life since starting hockey, and they have all made me a better person.

Q: What do you enjoy most about playing high school hockey in the PIHL?
A: Representing my school every time I step on the ice is a huge honor, especially being a team co-captain this year.

Q: What is the most-memorable hockey game you have ever been involved in with your PIHL team?
A: My most-memorable game was back in my freshman year, when I was playing on the varsity team against people 2, 3, or even 4 years older then me, and I finally was able to net my first goal for the team. That moment was huge considering I was never the most-skilled player on the ice and always just tried to get to the net anytime I was in the game. The mindset of just getting to the net lead me to that goal, where I was basically in the crease diving for the puck.

Q: Which opposing PIHL team do you really enjoy playing against, and why?
A: Playing against Mars is always a fun game just because of the history our two teams have. We've played them more than any other team, and no matter what the teams are looking like in any given year, the game is always tight and well played.

Q: Are there any routines or rituals you must stick to before every game, such as listening to a certain song?
A: Ever since my freshman year, me and our goalie Colin Rice were in a similar situation, where we were always just trying to get our chance to get on the ice. So we've developed some routines for both games and practice. We always sit in the corner of the locker room next to each other, go onto the ice and stretch together, and play a game to see if I can shoot the puck bar-down from center ice while on one knee.

Q: If you were put in charge of the entire sport of hockey and could change just one thing about the game, what would it be?
A: I would make the nets bigger and the goalie equipment smaller.

Q: Are you involved in any other organized sports or activities outside of high school hockey?
A: I play the drums in a number of musical ensembles. I have played for organizations such as the River City Brass Band and the Summer Pre-Collage program at Carnegie Mellon University, where I play all types of music from jazz, classical, and rock.

Q: What is something unique about you that most people would be surprised to know?
A: I'm a pretty good pool player. Billiards is something I've played for the past couple years, and I've enjoyed the game much more than I thought I would.

Q: What are your two favorite apps on your smartphone, and why?
A: Snapchat and 8ball pool. I'm always using Snapchat just as a means of communication, and 8ball pool because I love pool and it's gotten real easy to beat people in games.

Q: Would you rather be Superman or Batman, and why?
A: Superman, because he has real powers where as batman is just a rich guy in tight pants.

Q: What person outside of your family has done the most for you?
A: Coach Quinn has been a person who has always taught me to set clear objectives, not only in hockey but for anything that I want to achieve in my life. He's taught me that no matter what, never be lazy, always respect the people around me, and never ever make excuses for anything.

Q: What plans do you have for after you graduate from high school?
A: I want to go on to college to study music business and get into the music producing business, where I can use my love of music to help create the opportunity for as many people as possible to get into music and let them be heard.